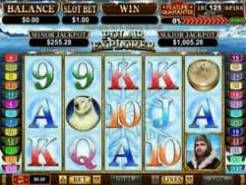 Play Now
The icy climate of the North Pole is not a deterrent in this exciting five reel twenty five payline slots game that offers three different bonus rounds within the game. The theme of the game is exactly as the title depicts with the main character, the Polar Explorer also being the wild symbol. In his warm coat and with his telescope in hand, the explorer can take the place of other symbols to make up a winning line and five of the Explorers in a row offer the highest payout in the base game. Other symbols include an elegant old fashioned ship, a compass, an unusual swordfish called a narwhal, otters and chilly looking letters and numbers of the high scoring cards. Players can try out the game for fun or practice at a number of sites despite the minor and major jackpots that are offered and can be won at any time during the game play. This game also offers a feature guarantee that will guarantee players a chance at the bonus game after 125 spins no matter what but this does involve a slightly higher bet that is notified to the player when he starts the game, an addition of 20% over and above the original bet value.

Three Bonus Games to Choose From

The ship acts as the scatter symbol and offers multiplying wins to all players that land three or more of these symbols on the screen. Behind the second, third and fourth reels snowflake symbols appear and when they make up a full snowflake pattern the bonus feature is triggered. Players are taken to a new screen where they can choose one of the three different bonus games. The Explorer feature offers players five free spins during which reels four and five have additional wild symbols. The Hidden Treasure feature offers players additional bonus wild symbols during 8 free spins. And the Discovery feature awards players 8 free spins during which there is at least one if not more additional wild symbols on the screen. During the bonus features, if three ships or more appear, players receive an additional five free spins. The Polar Explorer slots game also offers players an Auto play option allowing them to preset a number of spins to run consecutively without stopping leaving the player to enjoy the game hands free. This is a chilling game to look at but a very warming game to enjoy.
Play Now