Will You Satisfy the God of Wealth for Cash Prizes? 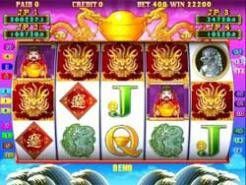 Play Now
God of Wealth is a great little slot game from RTG that brings into play a Chinese theme. You can expect a nice detailed selection of symbols here, and while not all the symbols are related specifically to the theme, there are no K, Q or A symbols in play. Instead, you get a series of number 8s – lucky in China – that appear in different colors. Let’s get down to business to see which features are going to appeal most.

Let’s get the lowdown on the reels and paylines

The message on the left side of the screen reveals there are 25 lines in play. It’s pretty obvious there are five reels, even though there are no clear divisions between them.

What can you bet on God of Wealth?

You can go from 25 cents to $6.25 on this slot. This is the total bet for covering all the lines.

Can you expect to see any special symbols?

The God of Wealth is the wild, but he will only appear on the middle reel during the normal game. He does however double the prize you get if you include him as part of a winning line. Meanwhile, the scatter in this game is represented by a gold ingot. Two will secure a prize, but three or more will also bring entry into a special game feature.

Does this slot game have a bonus round?

Remember the gold ingot we mentioned? Whenever you get three or more, you will be asked to select each one in turn. Each one will reveal a number of free games for you to play, which could be up to 10 each time. The God of Wealth still only appears on the third reel during free spins, but he does have a special power too. If there are any dragons, tigers or oxon on the reels, the God will replace them with his own image. This is done before any pays are granted, as it can mean you win more in this way.

Download and play a game of God of Wealth slots today!

With a progressive jackpot that can be seen at the top right of the game screen as well, it is easy to see just how good God of Wealth is. It has some nice features that are unique to this game, which gives you yet another reason to give it a try.